Pawn shops have a long and robust history throughout the world. One of the longest-running pawn civilizations is that of Hong Kong. Dating back to 3,000 years, Buddhist monks began the first ever recorded pawn and trade operation when they began granting loans to peasants while holding common household goods as collateral. The world took note of this brilliant business model and soon western civilizations like Greece and Rome were implementing pawn loans to provide a way for the lower class entrepreneurs to build their small business dreams. 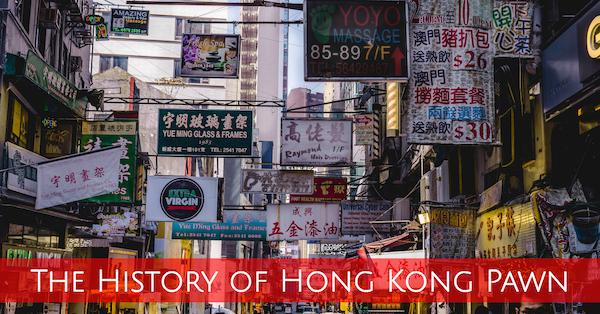 The History of Hong Kong Pawn

Unfortunately over the years, the unregulated industry allowed seedy and/or illegal activities to take place undetected, earning the industry a negative reputation in most western civilizations.

However in Eastern civilizations such as Hong Kong, pawn shops have continued to be pillars of their communities. The positive intentions of the Buddhist monasteries stayed with the business model for generations to come, creating a rich tradition. A government-regulated industry since 1926, there are now more than 250 pawn shops in Hong Kong. The law limits the amount of interest a shop can charge to 3.5% per month and limits the overall loan amount to $100,000 HK.

Eastern and Western pawn shops have much in common aside from their reputations within their communities. The business model itself is the same on both sides and the intentions of their customers remain the same. Shops in Hong Kong required collateral from their loan customers the same as in the US. And if the loan customer fails to pay back the amount of the loan, they lose their collateral. Customers are often folks who are interested in quick access to cash. Whether to finance an investment or payoff another loan, customers on both sides of the world find the pawn loan process much easier than dealing with the bureaucracy of being approved for other institutional loans.

What is really interesting is the trend both Eastern and Western pawn industries are currently experiencing of high-net worth pawning. If you read our previous article on Luxury Pawn shops, you know that the number of individuals with large amounts of capital, or the capability of producing large amounts of capital, is rapidly increasing. Turns out that high net-worth individuals across the world are recognizing the exponential benefits of using pawn loans over traditional business loans. The only differentiator between the East and West here is the low loan limit the Hong Kong government sets on their loan amounts.

So why do such identical industries have such different reputations across the globe? There is speculation that the 19th century boom of pawn brokers across Britain sparked industry competition that granted loans on practically anything (like bed linens). Taking into consideration that the industry was unregulated and there were no paper trails, pawn brokers could (and would) change the loan terms on borrowers at will. Whereas on the Eastern hemisphere, pawn brokers have always been viewed as part of a rich tradition that others in the community adore and value. In fact, when the infant mortality rate in Hong Kong was at a critical level, parents would choose their local pawn broker to serve as godparent to their child because they were viewed as an auspicious person and would bring good fortune to the infant.

If you are considering pawning one of your belongings or simply visiting us to see what is available for sale, please stop in at 14158A Lambert Rd in Whittier.